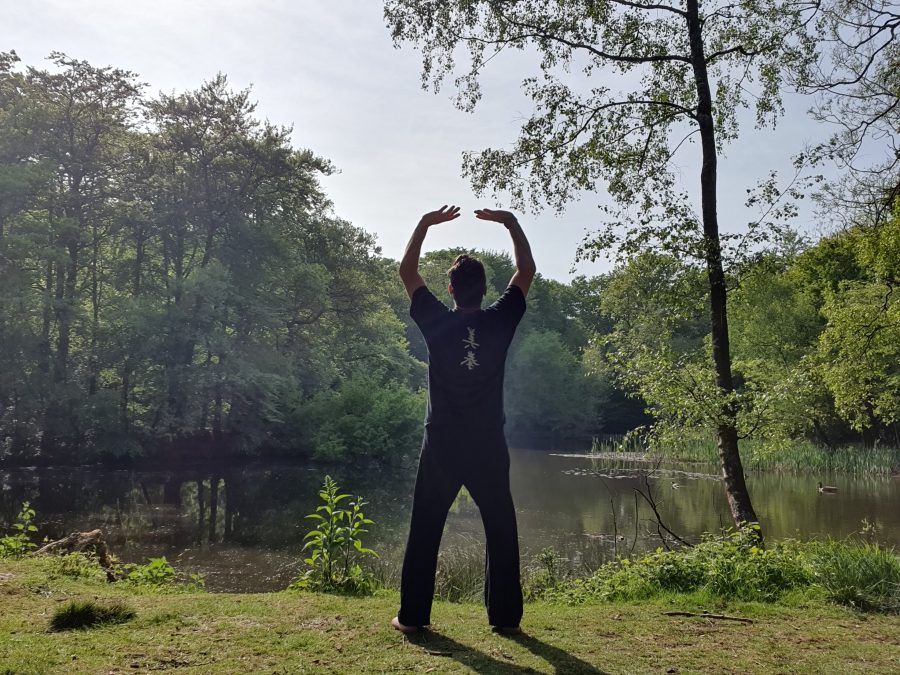 Qigong (often spelled Chi Kung, 氣功) is a powerful type of health exercise, which has been practised for centuries by millions of Chinese people. It is based on repetitions of very precise sets of movements, specifically designed to benefit health on many different levels.

Qigong is easy to learn and enjoyable to do 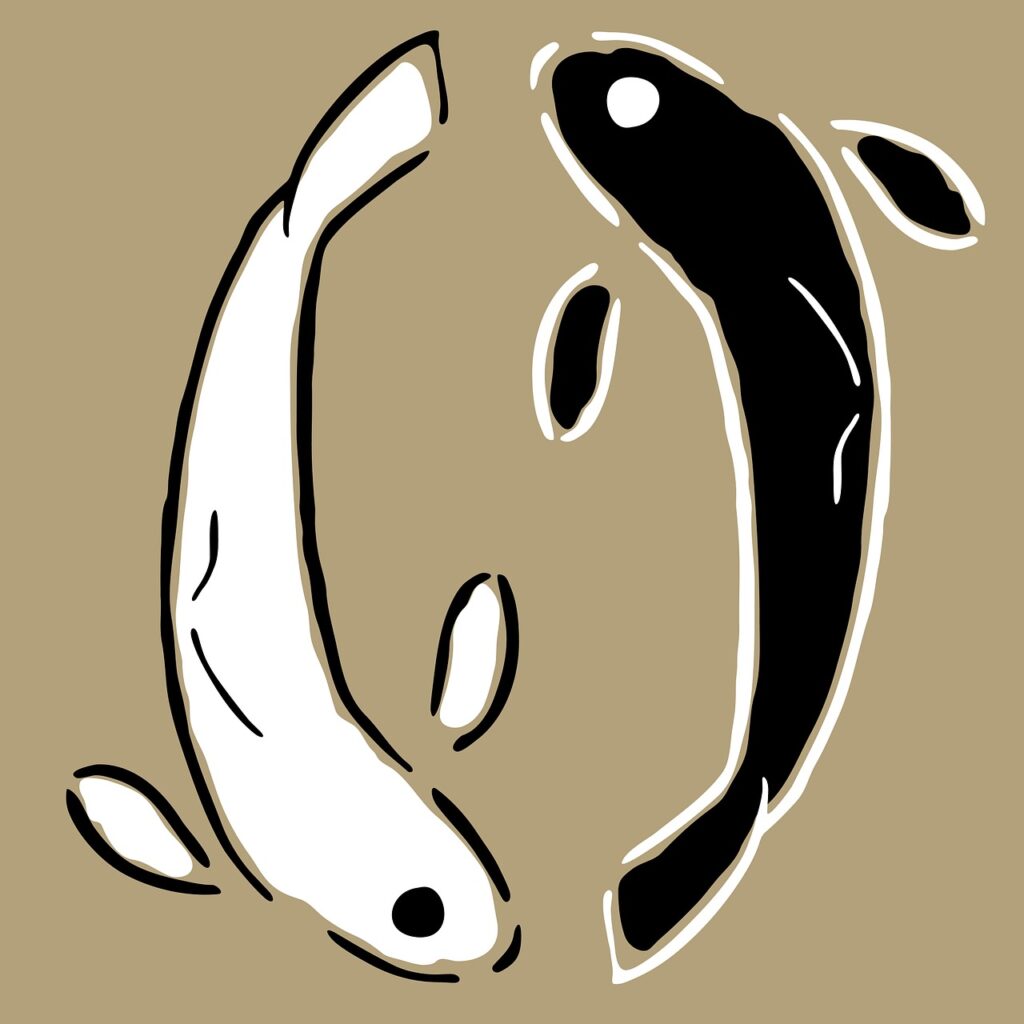 Even a few minutes of practise can have an invigorating and rejuvenating effect. Regular practice brings about a deep strengthening effect for the whole body and its various systems (nervous, digestive, respiratory, skeleton-muscular, hormonal, gynaecological, etc). Its ability to help in healing a large variety of chronic and acute injuries and illnesses has been the subject of various research programmes led by the Chinese medical authorities.

The aim of Qigong is to promote the movement of Qi (energy) in the body; this is done by opening certain gates and stretching and twisting energy channels. A key point in Qigong practice is relaxation and deep breathing, both of which are prerequisites to allow Qi to flow.

Qigong can be practised either as a discipline in its own right, or as a perfect complement to your Tai Chi training.

Some Qigong movements are very gentle, others more vigorous. Some movements are very large and expansive, others are more subtle, almost imperceptible. All are different and have a very specific effect on body and mind. The deeper one practises, the more one can understand the purpose of each movement, allowing the Qigong practice to become ever more enjoyable.

Feedback from past and current students shows that, with a little bit of regular practice, Qigong can have a powerful effect on mind, body and spirit. Reported benefits have included increased general health and well being, reduced levels of stress, and a brighter and more balanced outlook on life’s possibilities.

Qigong at the Mei Quan Academy

At beginner level, we teach the following sets within the Mei Quan Academy: 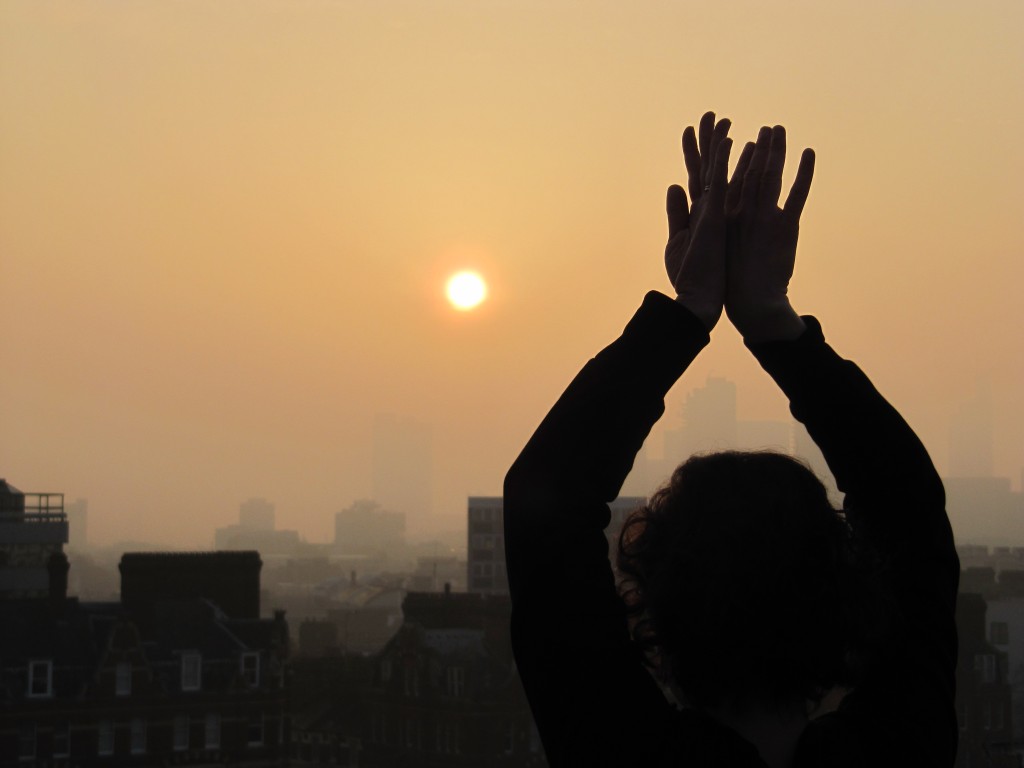 This is a set of eight simple exercises which has been practised unchanged throughout China for nearly 1000 years. Originally, it was used by the Chinese army to give strength and health in harsh adverse conditions. Nowadays, the set is performed to invigorate and strengthen the whole body including the internal organs. 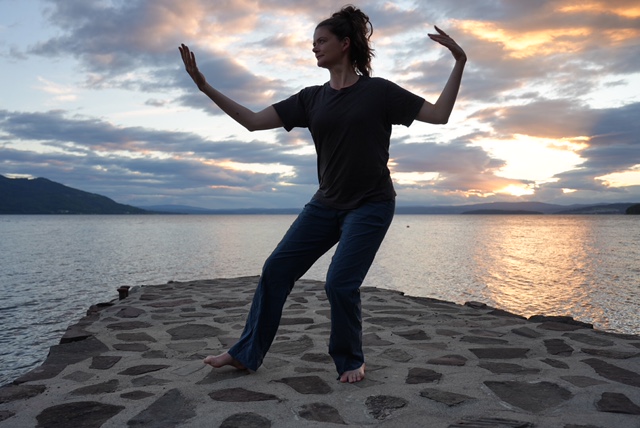 This is a famous Qigong sequence whose soft and flowing movements are based on Tai Chi. Practising 28-Step Qigong helps to learn the Tai Chi form faster and beautifully complements it. Each simple movement has many particular health benefits. 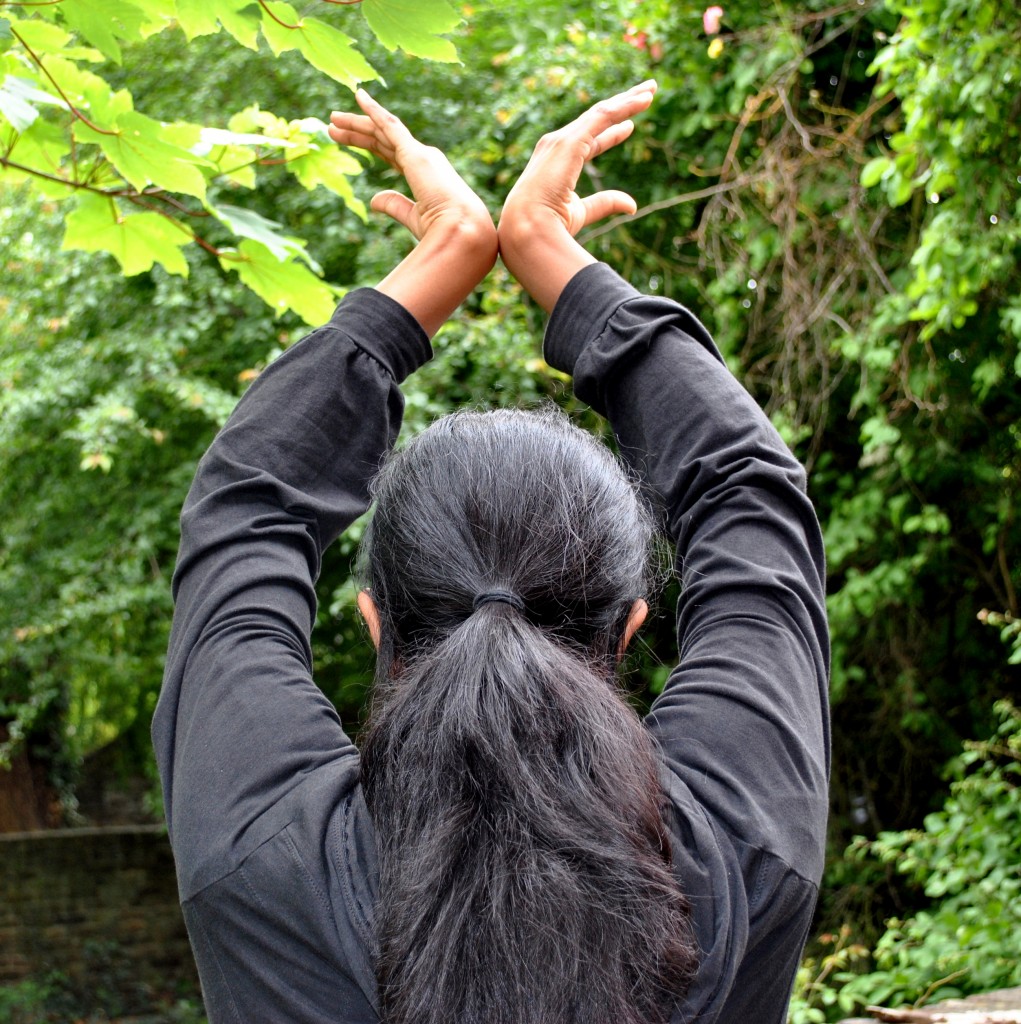 These are eight simple exercises which help to develop awareness of the body and feeling of Qi. 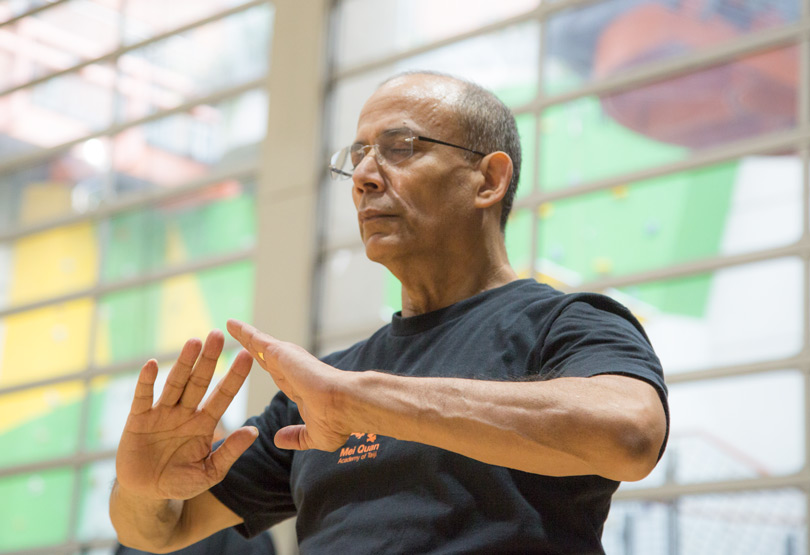 These are fundamental visualisations and breathing exercises which help to purify the mind and heart. They help to release anxiety and transform negative emotions into positive ones. 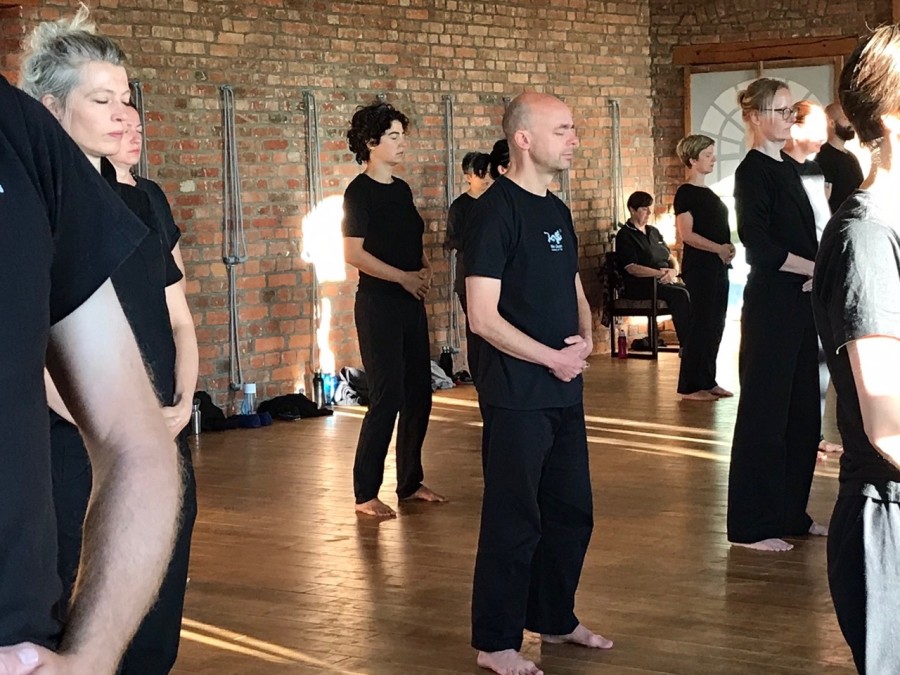 This is a sequence of standing meditation postures, which is fundamental to the practice of Qigong and Tai Chi. Practised regularly, Zhan Zhuang postures help to develop concentration and mental and physical strength. They are the basis of developing internal energy.

Qigong is a powerful system of health, which has effects on many levels.

Qigong can harmonise, strengthen, and have a healing effect on the functioning of all the internal organs and bodily systems. It increases the supply and flow of energy throughout the body, can have a variety of rejuvenating effects and is believed to increase longevity, and it induces calm mental and emotional states.

Initially many movements focus on gently opening and stretching the joints and muscles of the body, releasing tension that has often been there for years. By increasing the flow of blood and energy, they help to fully nourish all parts of the body. Many of our students report that they feel very relaxed and energised after a session of Qigong, and that they sleep very deeply that night!

According to Chinese medicine, the energy relating to the body's internal organs flows around the extremities of the body – the hands and the feet. Thus by stretching the arms and legs in specific movements, the health of the internal organs can be improved.

The breathing in Qigong is all-important. The breath should be relaxed, slow and deep, originating from the diaphragm. This type of breathing has a very calming and balancing effect on the mind, which is crucial in counter-acting the effects of worry and stress. Just a few minutes of Qigong whenever you start feeling stressed can really work wonders.

These are just some of the benefits that you can experience in the early stages of practice. As you gradually become more and more aware of your body, you will start to feel some of the more subtle and refined effects of Qigong.

The origins of Qigong date back thousands of years, probably to ceremonial dances carried out by tribes in various parts of China. It is believed that specific rhythms and movements of the dances were developed in order to strengthen the dancers, both physically and mentally and toward off disease.

Over time, the original dance movements were systematised, creating health exercises that could be practised every day. One of China’s legendary founding emperors Huang Di (the Yellow Emperor) is said to have practised Qigong on a daily basis and as a result to have lived healthily for well over one hundred years. 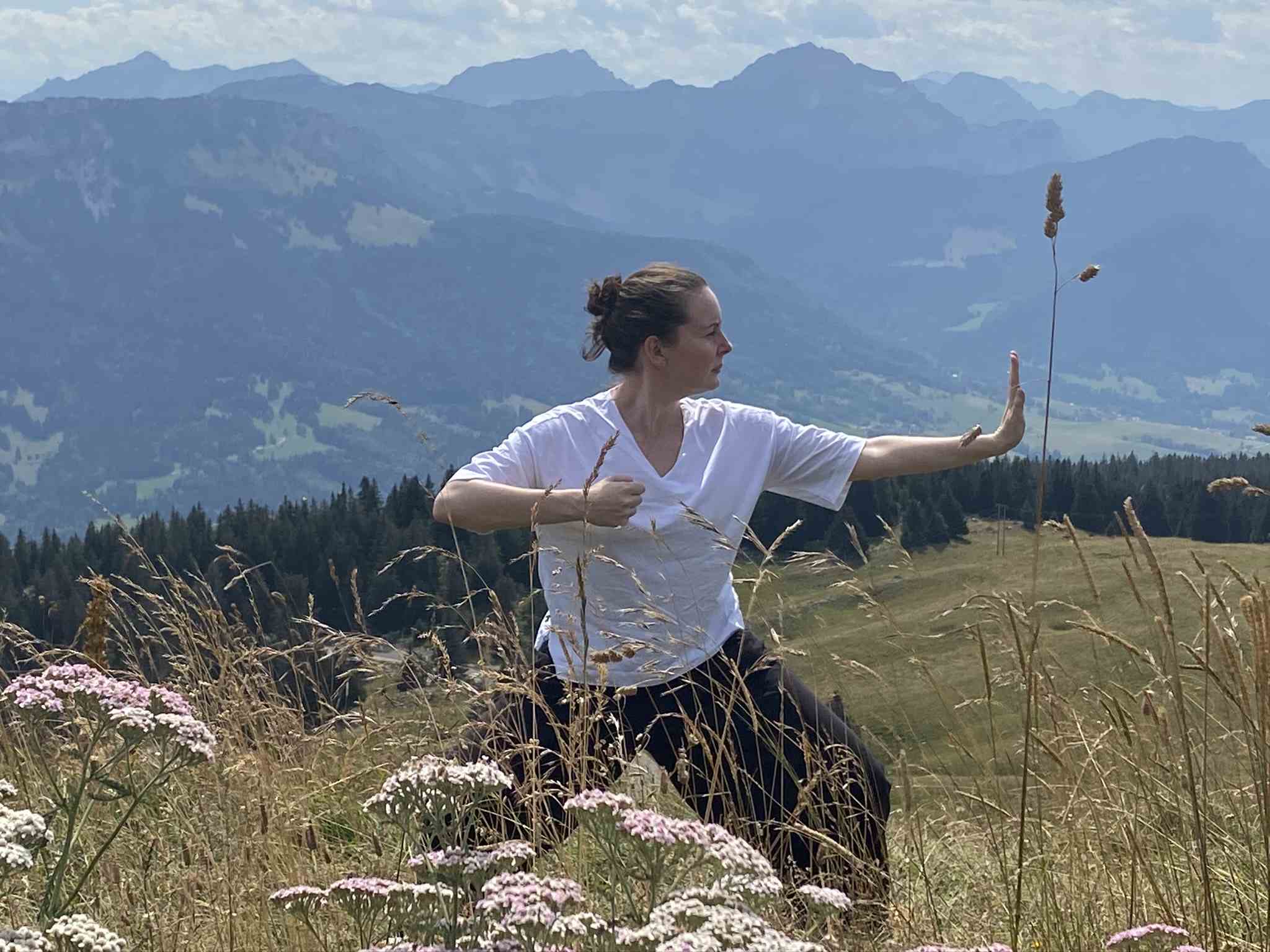 Later, during China’s agitated Warring States period (419BC–220AD) many Chinese sages and scholars developed various practises and philosophies. Among them were the alchemists, who tried to use Qigong, along with diets, herbs and regulated sexual practices etc, as a means to achieve immortality – it was reported that many of them lived to a remarkable age. One of the main insights they left behind was that the “elixir of life” resides within each of us, and that by cultivating it regularly, everybody can achieve health and longevity.

Since that time, various systems of Qigong have emerged, including the Eight Pieces of Silk Brocade, which, today, is still one of the most commonly practised sets. They are usually attributed to General Yue Fei (1177–1279 AD) who is said to have developed them as a means to train his army – and it is said also that thanks to these powerful exercises it was never defeated.

Over the millennia, Qigong has been practised by intellectuals, monks, warriors, and ordinary people mainly for three different purposes: martial, medical, or meditative. At Mei Quan, we teach the Eight Pieces of Silk Brocade and other exercises to give students a solid grounding in Qigong. After that, and if they so wish, students are welcome to explore any of the other aspects of this marvellous practice.